Every time you take a bite out of your burger or sandwich at your favorite fast food restaurant, have you wondered about how the theme of food chains was first developed? After all, had it not been for this pioneering idea, McDonald’s might still sell burgers only out of Monrovia, California. So who developed the idea that created the multi-billion dollar industry that operates all over the world? This distinction goes to Edgar Waldo “Billy” Ingram and Walter Anderson, founders of the first burger chain ever, White Castle.

This chain of burger restaurants was started almost 100 years ago when Billy Ingram ran into Walter Anderson, owner and operator of three burger stands that were doing good business despite their small size. Soon, this incongruous twosome, one a burger stand owner in Wichita, Kansas and the other a partner in an insurance company, began the White Castle. The first store opened in 1921 with an initial investment of $700. Their biggest challenge? Americans didn’t think much of the burger at the time. They actually thought of it as unsafe to eat. 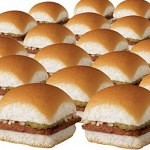 Ingram and Anderson had to find a way around that view. So, they opened their first restaurant in a small structure displaying smart, steel facades with porcelain touches. The interiors were largely stainless steel giving it a feel of hygiene and sanitation. The store owners also made sure their employees always sported spotless uniforms and were well groomed at all times. And, they added another touch. Customers could watch the beef being ground up for their burger patties, further instilling in them the confidence that the food was healthy enough to be consumed.

It did seem like the combination worked because the small burgers (you know them today as sliders) that White Castle served up at 5 cents apiece soon became really popular. The company grew quickly and in 10 years time had opened branches in El Dorado, Kansas, Omaha, and many other cities in the Midwest, extending as far as New York and New Jersey. To make sure that the food served was almost identical in all locations, Ingram and Anderson developed the White Castle System

According to this system, every restaurant followed the exact same recipe, cooked the burgers in precisely the same way and assembled them by way of a preset order that chefs in every outlet kitchen were not allowed to change at all. This system was perhaps, what brought us the fast food assembly line that would grow into an industry some day. But, our pioneers were not quite done yet. There was more to come. The next idea was to replicate the White Castle structures everywhere so that they had a recognizable signature look. So, Ingram and Anderson started subsidiaries that would build them perfectly.

While White Castle was doing quite well, the owners felt that customers needed some more convincing about the safety of the burgers. In 1930, they funded a study that followed the health status of a student who ate only White Castle burgers and water over 13 weeks. The student felt in “top physical health” at the end of the study.

By the end of the 1930s, White Castle became the sole property of Ingram. Soon, he had closed the stores in Omaha and Wichita and moved his head offices to Ohio. It’s ironical that, today, there isn’t a single White Castle outlet in the whole of Kansas, the state where it all began. One more facet to the many changes that were taking place was a new marketing strategy designed to bring in more new customers and ensure the loyalty of the existing ones. Ingram came up with the idea of coupons.

Customers could now pull out coupons from local newspapers and trade them for discounted prices of 10 cents for five burgers. The coming of World War 2 saw White Castle adapting to the rationing of beef by offering hot dogs and fried eggs also. To cope with the immense popularity, Ingram formulated burger patties with five holes so they would cook quickly and were tastier.

It is not that the company did not face competition. It’s just that it was not very successful. That is, until the emergence of McDonald’s with its idea of franchising. Ingram did not believe in franchising because of two steadfast principles. The first, he would not relinquish control of any of his restaurants and the second, he would only invest his own money in any new outlet. As a result, other fast food companies were able to expand far more quickly and White Castle soon fell behind.

But, there was one factor that the competitors had not reckoned with. Customers loved the White Castle burgers. And soon, they took to shipping them to friends and family packed in dry ice. Just so, everyone could enjoy them even if there were no outlets in their area. In the 70s, White Castle responded to the demand and began their own “Hamburgers to Fly” program. The company began to  freeze its products and sell them to grocery stores everywhere.

End of an Era

Billy Ingram passed away in 1966, but left behind a legacy of over 400 family-owned restaurants that were spread across more than 12 states. Today, the ownership of the company rests in the hands of the descendents of Ingram. Not only do customers still love and appreciate the White Castle burger, but the brand features in songs and movies. And continues to hold its own against the many others that have followed in its footsteps.